A Wellness Journey around Ibiza. Ideal for spring, summer or fall season.

A summer destination that needs no introduction, Ibiza holds a worldwide reputation for party vibes and glitzy beach clubs. This 7-day charter itinerary sailing in and around Ibiza & Formentera is the perfect way to enjoy the authentic Spanish side to the island along with its stunning natural beauty while still being able to indulge in some summer hedonism and will help you get the most out of your wellness journey around the White Isle.

Step aboard your catamaran in the lively resort town of San Antonio and set off along the rugged coastline of this bohemian Balearic Island.

You will soon reach Cala Bassa and Cala Compta, a group made up of several small coves, located in a natural environment of extraordinary beauty. The combination of sand brightness and the reflection of the sun on its waters of turquoise colour make this place a real heaven at any time of the year.

Here the sight of the sunset is a must, you will be able to gaze at the colourful spectacle of sun at sunset with the small islands of s´Espartar, des Bosc and sa Conillera as silent witnesses.

Cruise to the pretty protected bay of Cala Vadella with its pine-clad hills, mystical caves and white sand beach.

You’ll then cruise to the quiet beach resort of Cala d’Hort. Nestled into the hills, Es Boldado restaurant is equally famous for its fantastic seafood and incredible views. This unique experience allows you to enjoy world-class dishes whilst overlooking Es Vedrà Island. As you set off from Cala d’Hort you’ll get a closer look at Es Vedrà.

This small yet dramatic island is the third most magnetic place on earth and is steeped in myths and legends, from sirens and sea-nymphs to the birthplace of the goddess Tanit. Make a wish when you see the island.

The island of Formentera is known for its laid-back atmosphere and some of the most picturesque scenery in the Balearic Islands. Take life at a slower pace here so spend some time meandering around one of its tiny villages. Cala Saona is known as the jewel of the west coast of Formentera, being the only sandy beach to be found among the cliffs that prevail throughout the southwestern part of the island. Unlike the open beaches of the rest of the island, it is a small cove flanked by cliffs.

This whole area of coastline is made up of cliffs but Cala Saona is an exception, nestled in a small bay between Punta Rasa to the south and Caló d’en Trull to the north. What is most striking about this beach is its sandy seabed and turquoise waters, like many beaches on Formentera, but here you can also enjoy one of the best sunsets on the island, watching the sun sink behind the horizon. Moreover, being a sheltered spot, in the past it was used to build many boathouses to shelter the traditional llauts, giving this particular site a special charm.Sigue la navegación hacia Formentera.

Sail to the uninhabited island of Espalmador to explore its famous natural mud flats and local wildlife. Round off the morning and dip your toes in the mineral-rich mud baths that occur on the side of the beach. Find a hidden cove along the coast. Stop-off for lunch in one of the trendy restaurants dotted along Illetas Beach – Juan Y Andrea is a stellar option for fresh seafood and a great ambience.

Afterwards, head over to Beso Beach for freshly-blended mojitos and party vibes that go on all night. In La Savina there is a welcoming street market right on the seafront promenade and here you can browse for jewellery, crafts, clothing and assorted souvenirs. The market is open every day from 11:00 a.m to midnight. A wide range of restaurants overlooking the sea skirt the port of La Savina. It is the ideal opportunity to relax while we take pleasure in the exoticism of this coast.

Day 5 – Where do you want to go, East of Formentera or North of Ibiza?

At this point there will be two options depending on whether you want to spend more time in Formentera or want to explore the wild North Ibiza.

This coastline is a great choice for those who seek the peace and quiet of its eastern side or, on the contrary, prefer easy access and the option of enjoying all the services without renouncing the quality of Formentera’s coastline. The north coast of Formentera, which extends beyond Punta Prima in the direction of La Mola, is known as the Tramuntana coast due to its north-facing orientation. And this area is home to a charming little-known place called Ses Platgetes.

Explore the corners of Ibiza’s coastline, from Cap Martinet, passing Illa Tagomago on to Cala Xarraca to enjoy the idyllic settings. Enjoy a refreshing splash in the sea and take advantage of your yacht’s selection of water toys. Step on shore at Cala Xarraca for a beach picnic in the sun. Afterwards, the western coast of Ibiza volunteers a spa, Hacienda Na Xamena is a haven in the hills, with access to incredible spa facilities and a restaurant. It’s also a hotel, so you can spend the final night of your charter unwinding in luxury.

Day 6 – Are we going to the south of Formentera or continue to the north of Ibiza?

Depending on the option chosen on Day 5 we will sail south of Formentera or north of Ibiza around the island. Both options are wonderful.

Migjorn is the name given to the south coast of Formentera, with a five-kilometre stretch of paradisiacal beaches. This is the longest beach on the island and is made up of various coves interspersed with rocky and sandy areas. Each of them has its own name and has several access points.

Cala Saona and its fascinating caves, an amazing site for snorkelling or scuba diving.

Cruise to San Miguel and Cala Benirras with pebbly sand, beautiful turquoise waters and interesting rocks makes Cala Benirràs a breathtaking beach to relax on. Even the approach to this beach is aesthetic, with winding trails through hills and valleys!. Great for snorkelling though, with marine life darting in and out of the rocks that the waves have left behind.

Sail to Ses Margalides islets and towards the beautiful backdrops of Cala d’Albarca. Surrounded by cliffs covered in greenery and scattered with huge boulders, this little bay is considered one of Ibiza’s best-kept secrets. Once you’ve taken in the spectacular views of its famous natural bridge, you’ll head on to the bay of San Antonio to watch the sunset in the peaceful pine forest setting and away from the crowds through secluded spots such as Cala Gracio and Cala d’en Sardina. Return to base in San Antonio.

Calmly, unhurriedly and feeling rebalanced and revitalised we head back to San Antonio in Ibiza. Your charter ends here!

What do you think of our proposal for a 7-day catamaran holiday?
I want a personalised offer 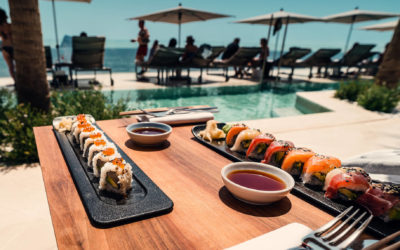 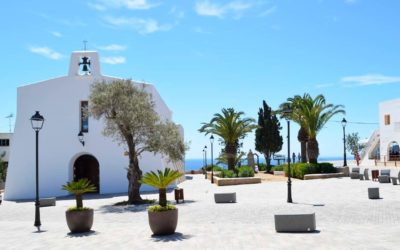 There is something magical about the Ibiza villages that attracts visitors year after year and many of them end up establishing their second residence on the island. People define them as white, quiet, bright, welcoming, many open to the sea and all inhabited by... 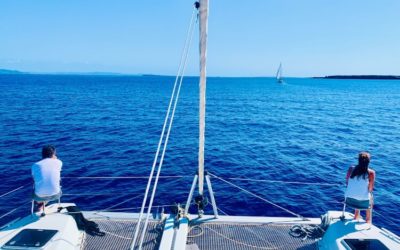 Day charter boat experience:
I am in New York, in my office located on the 26th floor with the best views of Manhattan under my feet… and I can only think of the last day charter boat of the summer.

For your information: The data from this form will only be used to contact you because you have contacted GOA. Your personal data will never be used for any subsequent advertising campaign or passed on to any third party as stated in our privacy policy.