Discover Es Vedrá island by boat
Es Vedrá is an islet close to the town of San José on the Island of Ibiza, which is part of the Es Vedrá Natural Park, Es Vedranell and the Ponent illots. This iconic rock, which is currently a must-see for both tourists and locals, has been uninhabited for centuries. Access to these islets is exclusively by sea through private boats and with a permit. At GOA we offer daily excursions for private groups all year round.

Do you want to know more about the island of Es Vedrá?

Es Vedrá is home to twelve species of endemic plants in the region and one is exclusive to the islet. These species are of high botanical, ecological and biogeographic interest due to their rarity. At the beginning of 2016, about 50 feral domestic goats lived in Es Vedrá and the Balearic Government forced its eradication in order to protect the endemic plants of the islet.

The only human footprints today are the goats, the lighthouses, and remains of silos.

Es Vedrá is one of the most magical and enigmatic corners of Ibiza that over the years has been a source of inspiration for musicians, artists and filmmakers.

The religious and the divine do not escape the mystery of the island of Es Vedrá either. Father Palau (founder of Es Cubells) was a Carmelite missionary who made several spiritual retreats in caves near the islet. Palau claimed to have witnessed on more than one occasion “paranormal and Marian appearances” in this place.

The rock of Es Vedrá has extraordinary powers as an energy accumulator. Along with the Pyramids of Egypt and the famous moai statues, Easter Island is one of the largest magnetic centers on Earth. Which disorients the birds and generates interference on the radars of ships and planes, which is why they usually avoid approaching the islet. 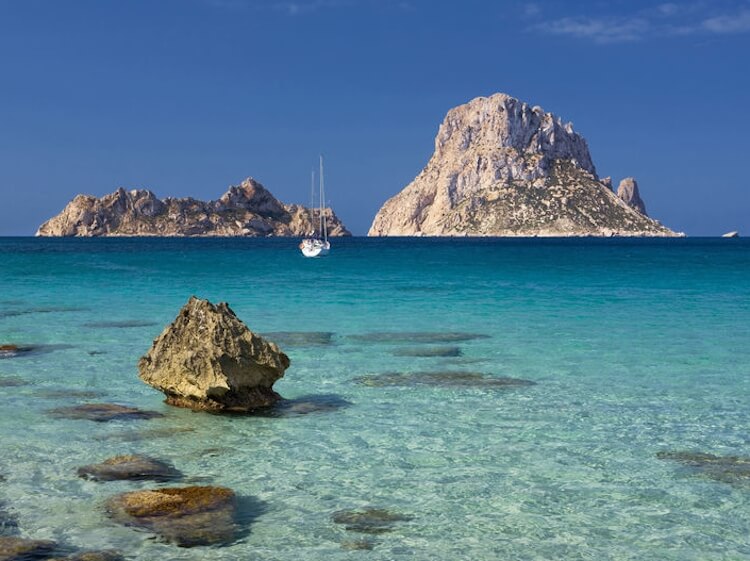 Es Vedrá: The triangle of silence

Experts maintain that Es Vedrá forms part, next to the Peñón de Ifach (Calpe) and the southwest coast of Mallorca, of the so-called ‘Silence Triangle’. Area with similar characteristics to the well-known Bermuda Triangle. This perhaps would justify several of the paranormal events that have occurred on the Islet.

Many local fishermen say they have seen lights and strange objects in their waters. Several swimmers (including professionals such as José Amengual, Spanish champion in underwater hunting) claim to have seen schools of fish changing their course when hearing loud noises underwater in the area. And there are many people who claim to have seen unidentified flying objects around the mysterious stone mass.

On November 11, 1979 an airplane that was going from Palma de Mallorca to the Canary Islands with 109 passengers on board, landed in an emergency at the Valencia airport. The pilots claimed “to be harassed by a series of red lights that went up and down in an unconventional way” “in front of the islet of Es Vedrá, the following day told ABC.

While the pilot was requesting landing permits, two Spanish Mirage F-1 military aircraft were ordered to be dispatched, piloted by Fernando Cámara with the aim of identifying this phenomenon. The pilot, then captain of the Air Force, soon found this red light, which remained static over the Manises airport: “I was flying at about 1000 km / h, when I reached that light it went from being static to flying in front of me at the same speed. I realized that thing had detected me since the threat systems of my plane were triggered “

It was the first time in Spanish history that a commercial aircraft had been forced to land emergency due to a UFO sighting.

A giant who lived under the waters of the islet and who attacked anyone who dared venture to it. It tells the story of two brothers who had to go to Es Vedrà to collect fonoll marí, a medicinal plant that could cure their sick father. When the giant suddenly caught one of the brothers, the other brother rushed to catch many octopuses, the giant’s food, putting each one a sea urchin. After offering the octopuses to the Gegant d’Es Vedrà, he began to feel ill, the two brothers were able to escape and heal their father.

‘A man climbs and a woman descends’

Es Vedrá island has 382 meters and according to an ancient legend it could not be climbed since whoever managed to reach the summit would change sex instantly. 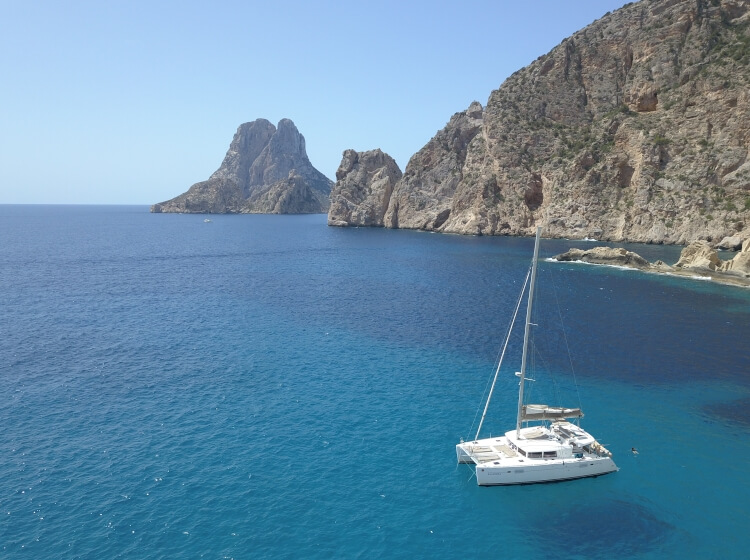 This boat trip to Es Vedra is one of the best options to enjoy a day on a boat in Ibiza with your friends and family. If you come with children, the mystery and stories of these magical islets will give an extra incentive to your boat trip to the south west of the island.

If you have any questions or would like more information about this boat trip for private groups or any other option that GOA Catamaran offers, please do not hesitate to contact us.

Book your excursion with us now and ensure the availability of your catamaran for 2022.