The joy of a breakdown

In today’s post we tell you about the personal experience lived by one of our skippers on one of his catamaran trips around Formentera with some clients.

I had been docked for four days in the Marina Botafoch, nearby  the city center of Ibiza, the perfect place for its proximity to go to Formentera. I used to work  as a skipper and every day I had a group with a different profile, whether they were Lebanese, Belgian, English, Australian, families, friends, couples, etc… Always diverse and unexpected, that’s Ibiza.

This time I thought it would be a quiet excursion. Two couples from Peru embarked, they wanted to anticipate the scheduled departure from 11 in the morning to 10, and they had also booked a table to eat at the restaurant of Formentera El Moli de sal at 13h. All this was communicated to me by whatsapp, so I expected to receive two calm couples of a certain age. I was a bit tired from the previous boat trips and I was very happy to enjoy a relaxed day.

They arrived a bit late. They were two young couples, about 25 years old, loaded with bags of drinks that did not fit in the refrigerators.

It did not correspond to the profile of the clients that I expected, neither by age nor by the content of the purchase, but I still hoped that the excursion would be quiet, we would eat at one and return early.

As soon as we left, they asked me for permission to put their music and connected their Iphone to the ship’s equipment by bluetooth, and that’s where my odyssey began. The loudspeakers roared in such a way that they seemed to be coming out of their gaps. The whole ship vibrated to the sound of its terrible “Electronic Music Dance”. I did not listen to the noise of the engine, or what they were saying loudly, nor did I have earplugs on hand.

They told me that music was a priority and that they had also advanced the departure time because they were partying non stop without sleeping a single day.  Then I understood how naive i had been and the wrongness of my perception. From senior calmed couples to the opposite!, Young and after hours! 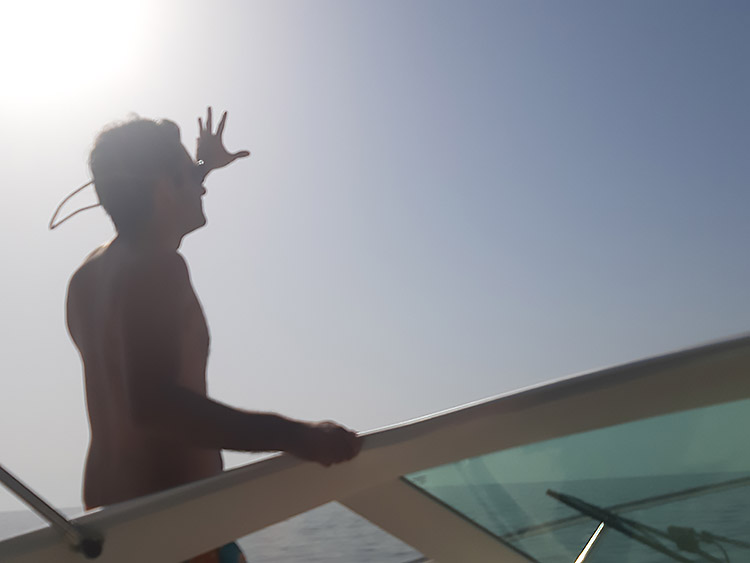 The guys were lovely and I absolutely wanted them to enjoy their sailor day, but I couldn’t anchor with this volume of music next to other boats, because it would bother them, so I decided to take them to the Porks Bay in Espalmador. There can only enter vessels of very small draft, maximum 75 cm deep, and belonging to the natural park, music outside the boats is prohibited. They loved to enjoy a few moments of that peace that provides living in harmony with nature. They kept repeating to me how pleasant this peace that nature gave us in that particular spot meant to them, and I did not dare to tell them that it was because that thunderous music did not sound.

Upon leaving, they asked me to go to places where there was no one so they could continue with their “Electronic Music Dance”. I took them to a couple of deserted beaches where they could swim listening to their music without disturbing anyone.

I insisted that there was no need to be late for the restaurant although it didn’t seem to worry them too much. And to my misfortune they told me that they were not hungry and that we should not stop to eat. I wouldn’t eat all day!

Well, we continued from beach to beach and I tried to convince them that the best waters were where the other boats were anchored and that there was no place to play music, so that I managed to avoid at times such raucous music, but soon the torture returned. They were comfortable and did not want to return to Botafoch so they asked me to extend the excursion beyond what was stipulated. More devil music, I thought… but they were nice and polite and I agreed.

We stopped in the turquoise waters of Atlantis, in the very deep Es Vedrá waters, Cala d’Or and Cala Conta alternating delirious music with the beauty of stunning spots and a fabulous day. But at one point, due to the thunderous volume, the main speaker of the ship finally broke, and for once a breakdown brought me immense joy!.

As we went down we hugged and they thanked me for this peaceful and wonderful day that they had had.

They were partying again without going to bed to rest.

I don’t know if they survived…

What do you think of our skipper’s experience?

If you would like to make a day trip on a catamaran, “with or without music”, do not hesitate to call us (Isabel Fiesta) or write to us by e-mail at info@goacatamaran.com